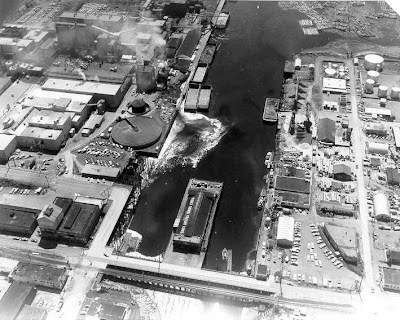 Whatcom Waterway, 1975
Georgia-Pacific Paper Mill is to the left.
Note plume of pollution within the waterway
Five years ago I wrote an article in the Cascadia Weekly on one of the cleanup aspects on the Bellingham Bay waterfront. Given that five years have passed, it may be worthwhile revisiting the site to see how things have been proceeding. Although this policy issue is Bellinghamcentric, the policy decisions made have regional impacts as the costs of the cleanup may impact available cleanup funds for other sites Washington State. And perhaps this story has some other lessons as well.

The site of the Georgia-Pacific Mill is located on fill soils that were placed on the tide flats of Bellinghan Bay. The fill area had been used as an industrial site for many years and included a paper mill before GP acquired the site. GP built a chlor-alkali plant on the site in 1965. This plant produced chlorine for bleaching paper. The method of producing the chlorine used mercury cells as cathodes to separate sodium and chlorine out of salt water.

GP made improvements to the operation of the chlor-alkali plant and other plant operations that greatly reduced the mercury discharges. They also built a large enclosed lagoon called the Aerated Sediment Basin (ASB) to settle out organics and aerate them before the waste water was discharged into the bay. 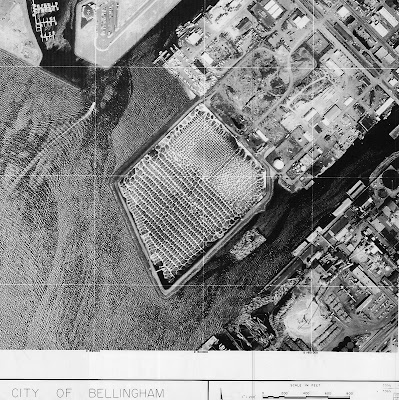 1988 Aerial Photo showing the ASB
The mill continued to operate through the early 2000s. However, the legacy of mercury contaminated sediments remained a problem and GP was required to cleanup the sediments. This started a long difficult process for GP. Geology had provided GP a lucky break in that the Nooksack River that flows into Bellingham Bay is a glacier fed river and therefore is very silty. Much of the contaminated sediment had been naturally capped by silt entering the bay from the river. But hot spots remained particularly in the vicinity of the Whatcom Waterway.  Clear water and currents from Whatcom Creek prevented the burial of mercury along much of the waterway. Furthermore, the Port of Bellingham wanted the federal designated shipping channel in the waterway maintained and wanted the waterway to be dredged to the federal mandated depth. In early talks, the Port encouraged the idea of using the dredge spoils to create a new upland fill area on the tide flats that the Port could use as additional land. But this required the cooperation of the land manager - the Department of Natural Resources (DNR). The DNR was not interested in allowing the tide lands they managed for the people of the State of Washington to be used as a fill site. The DNR was also hesitant to allow areas of the bay to be used as confined aquatic disposal areas (essentially underwater landfills).
GP was faced with some serious costs of dredging and hauling wet sediment to a landfill. GP then proposed a plan of excavating the waterway and nearly all the contaminated sediment and placing the sediment within a portion of the ASB. Given that they were scaling back plant operation, they no longer needed such a large ASB. With this much cheaper approach, GP was willing to pursue an aggressive contaminated sediment removal and proposed this approach to the Washington State Department of Ecology (Ecology) as the preferred cleanup approach for the contaminated sediment. The approach had the support of Washington Fish and Wildlife, DNR, and citizen groups as it would provide the maximum amount of mercury tainted sediment removal and avoid debates about the effectiveness of covering the contamination in place. This approach, known as Alternative J was estimated to cost $23 million.

However, the Port of Bellingham had other ideas about the ASB. The port saw the ASB as a perfect site for a future marina and with GP likely to close at some not too distant future date, the Port wanted the site as ready built marina. The Port proceeded to start condemnation proceedings to acquire the ASB property. In the end GP and the Port reached an agreement whereby the Port acquired the entire GP property and took on the responsibility for cleanup of the contaminated sediments as well as contaminated sites on the upland portion of the GP mill site. This agreement was completed in 2005. GP closed down at the end of 2007.

With the Port wanting to convert the ASB to a marina, the preferred Alternative J was no longer viable. A new alternative would need to be crafted by the Port that would fit their waterfront vision of a new marina in the ASB. In 2006 Carolyn Casey, corporate communications manager for the Port of Bellingham was quoted in the Northwest Business Monthly, "In 2008, we'll begin removing that waste to an upland certified disposal facility in eastern Washington, at an estimated cost of $30 million." Things have not gone that smoothly; no cleanup has been started and the waterway and portions of the bay remain contaminated with mercury.

Next: Understanding the cleanup
Posted by Dan McShane at 1:58 PM

Why arent the various toxic sites around downtown Bellingham marked by signage. Where are the lawsuits to force the Port to clean up the bay?

Are the people of Bellingham content keeping their heads in the sand while being poisioned.

Is there a way that we can read all chapters of the Bellingham cleanup saga in one place or consecutively (easily)?

Judith: The other chapters (5 in total) mostly follow directly after this one so just click "newer post" on the bottom left. You can skip the two other posts on the mix (one on I-84 and another on Cherry Point Coal terminal).