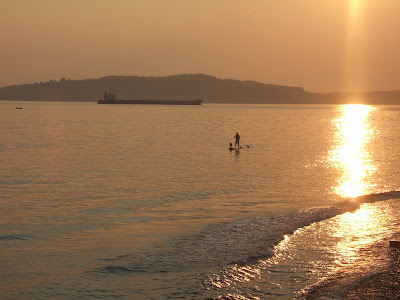 August 4, 2010 sunset at Alki Point, Seattle.
Since Sunday there has been a noticeable reddish/orangish hue to the sky from smoke once the fog burned off. Cliff Mass has a couple of nice posts regarding the smoke HERE and HERE. Timothy Egan also wrote up a nice piece on fires in the northwest HERE.

Despite a fairly cool spring and summer it has been dry in Washington. The fire season in Washington begins as the grasses in eastern Washington dry and then slowly but surely the forests begin to dry as well.First the drier pine forests east of the Cascade crest but given the right conditions even the forests of western Washington can dry out enough to be susceptible to fire. Even the very wet western side of the Olympic Peninsula has had big fires may years ago. Huge Douglas firs near Quinalt are the result of a fire over 500 years ago that allowed the firs to get established there. Fires are and have always been a significant part of landscape in Washington.