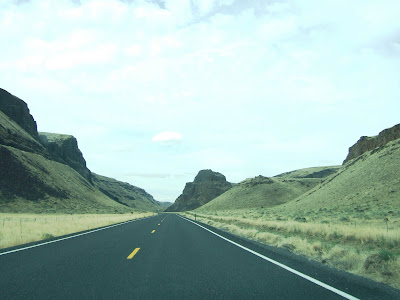 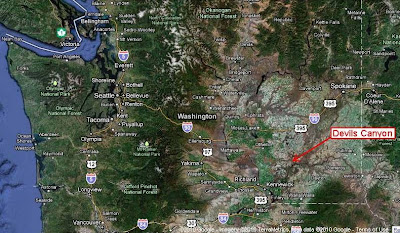 Location on Google Earth
Devil’s Canyon cuts a gash across the wheat fields from Kahlotus to the Snake River at Lower Monumental Dam. This is one of many flood way channels carved during the Missoula Floods. The satellite image from Google Earth shows the multiple channels carved through eastern Washington from the floods. The flood waters entered eastern Washington from the east when the glacial dam blocking the Clark Fork River collapsed. The collapsed led to draining of Glacial Lake Missoula. The lake was a big lake – 2,100 feet deep and containing 250 cubic miles of water all of which drained out and across eastern Washington in three days or less. The flood initially entered Glacial Lake Columbia which rapidly filled and over topped its valley sending flood water across multiple channels. 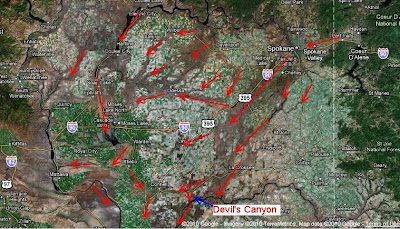 Arrows mark flood water routes across eastern Washington.
One of the largest flood routes sent water southeast from Spokane into the ancestral Palouse River Valley. The volume of water far exceeded the capacity of the entire valley and water spilled out of the top of the valley at multiple locations. One of these over spill routes became the new route of the Palouse River. The old river valley flowed though what is now Washtucna Coulee. Another over topping location is just south of the Town of Kahlotus into Devil’s Canyon. 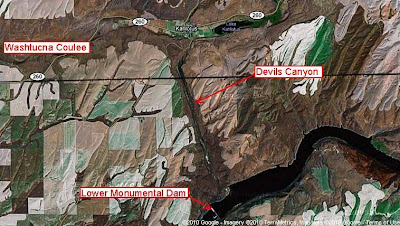 Devil's canyon cutting across Palouse fields.
I haven't figured out the mosaic of images cobbled together of the wheat fields. Its a mix of every season except the gold harvest times. 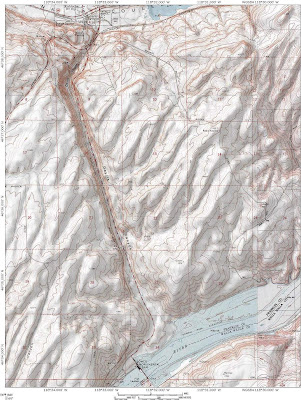 Topography. The north-northeast trending ridges are reflective of the wind direction that deposited the loess of the Palouse over the area both before and continuing after the great flood.
Devil’s Canyon cuts a straight, south-southeast trending, 600-foot deep gash through the Palouse wheat lands from the lip of the Washtucna Coulee to the Snake River. The straightness of the gash is reflective of major structural joints in the basalt bedrock and similar straight gashes are located to the east including the current Palouse River Canyon.

Most of the Devil’s Canyon walls consist of bedrock from another flood – the flood basalts of the Columbia River Basalt Group. The bulk of the basalt in the canyon is part of the Wanapum Basalts. These basalts were erupted from vents 60 to 100 miles east and southeast of the site and covered vast areas at the time of eruption approximately 15 million years ago. Younger basalts are present in the canyon as well and are part of the Saddle Mountain Basalts. These younger flows flowed down through the ancestral Snake River and adjoining canyons that had been cut into the older basalts. The flows exposed in Devil’s Canyon are on the order of 10 million years old, but a flow as young as 6 million years old is located to the south across the Snake River.

More often than not the columns that sometimes develop as the lava cools are vertical. In this case the columns are at chaotic angels reflective of the cooling direction. The picture is a view of the younger intercanyon flows of the Pomona, Esquatzel and Elephant Mountain Members of the Saddle Mountain Basalts filling an old canyon against the wall of the Frenchman Springs Member of the older Wanapum Basalts. 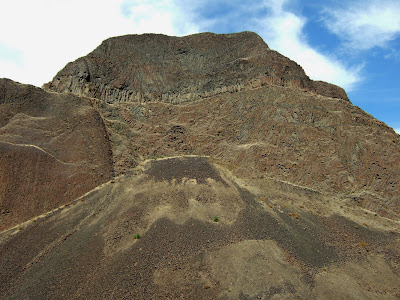 Wanapum basalt is on the left with younger basalt of the Saddle Mountain basalts filling in the ancient canyon.
The canyon provides a route for wheat growers to transport wheat down to the Snake River. The Snake carves a deep canyon across the southern Palouse and routes down to the river have long been a challenge for wheat producers. The Devil’s Canyon route is steep but there are no other roads down to the river for many miles east or west. A rail line formerly followed the canyon as well but the tracks have since been removed in favor of trucking and barge shipment. 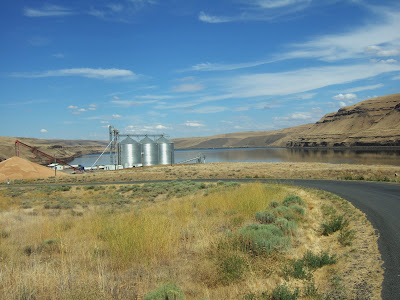 Upriver a bit at Lewiston, there are Missoula flood gravels interbedded with gravels deposited by the Bonneville floods. The foreset beds dip in opposite directions. They are exposed in an active quarry, so sometimes you get a good view and sometimes not depending on what they've dug away.
Nice blog!

Thanks Leslie. I saw an exposure of those forset beds at Lewiston earlier in the summer, but didn't have the time to stop. There are some reverse direction foreset beds just up the River near Starbuck. While the Missoula Floods get lots of attention, the one time Bonneville flood was impressive as well.