An atmospheric river  has been aimed at northwest Washington over the past few days and the rain continues today. A look at river level gages and predictions indicates some serious river flooding. But note too that many small streams have no flow gauges or predicted flood crests will flood as well.

The Skagit River has reached flood stage , but the current predicted flood crest at Mount Vernon will not arrive until tomorrow. The Skagit is a large river watershed and the peak flows take a while to get down to the delta area. Projections are for record flood levels at Mount Vernon. 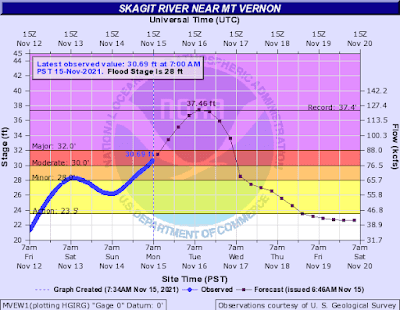 The much smaller Samish River also flows out onto the Skagit delta will peak faster with a record peak today. 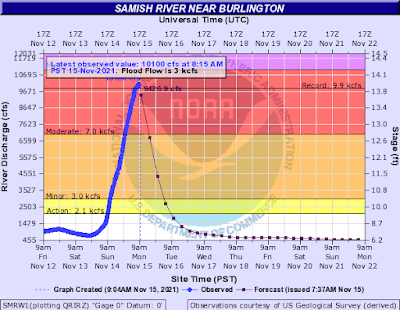 Both of these rivers flow out across broad low delta areas with portions of the deltas diked from tidal flooding. The Skagit has very large levees through Mount Vernon. But some over topping may take place. The Samish also has levees, but they will very likely be over topped. Once the delta floods the drainage out of the delta is restricted by the tidal levees -- all that water that spills out of the rivers then has to flow through drainage systems and tide gates.
The Nooksack River began flooding yesterday. The Nooksack flooding is complicated. At Ferndale the projection is a moderate flood level. 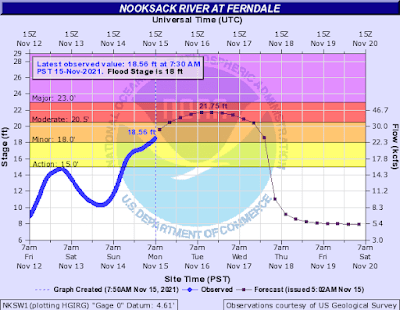 However, upstream at Cedarville the projection is potential record flood levels. 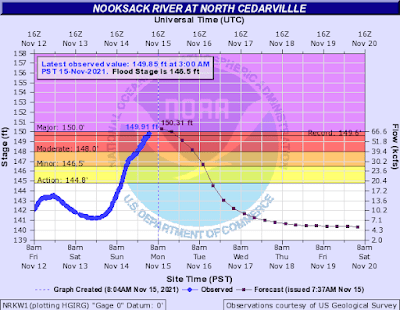 Between Cedarville and Ferndale the river flood waters flood out of the Nooksack and into the Sumas River River (everson-sumas-overflow). Hence, the flood levels at Ferndale is somewhat diminished by water laving the Nooksack and flooding into the Sumas River. The border town of Sumas in the Sumas watershed began flooding yesterday.
The Nooksack River has three forks that converge above Cedarville. This ads another complication to the Nooksack flooding because the timing of each forks peak discharge makes a big difference in the flooding downstream. There will be major flooding in the South Fork valley. 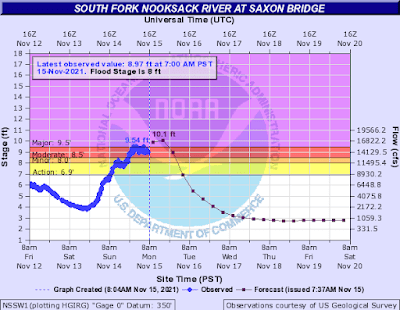