Lake Cavanaugh is located within the northwest Cascades near the southern Edge of Skagit County. The 2.75 mile long lake was formed by continental glacial ice that flowed eastward from the northern portions of the Puget ice lobe into the North Cascades.

Lidar bare earth imagery of Lake Cavanaugh area
Blues arrows indicate ice flow direction with the arrow on the left being the main flow path of the Puget ice lobe and the blue arrow across the top indicating the ice flow from the Puget lobe up into the North Cascades.
Lake Cavanaugh may have been an area of weaker fractured rock as it is aligned with the Darrington-Devils Mountain Fault zone.
The south shore area of the lake consists or a series of alluvial fans associated with steep creek drainages coming off the north side of Frailey Mountain. Frailey Mountain is a steep ridge that rises about 2,000 feet above the lake. The bedrock on the mountain is mostly metamorphosed ocean floor basalts of the Eastern Melange Belt, a tectonic terrain. Sandstone and conglomerate of the Oligocene age Bolson Creek Formation underlies some of the mountain as well and there are areas of glacial sediment on the lower slopes.
Due to the steep slopes and narrow drainages the small creeks on Frailey Mounatin are subject to periodic debris flows. 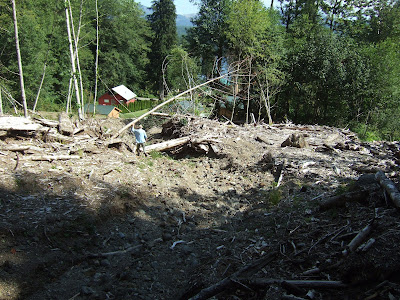 Debris flow on one of the unnamed creeks in 2016.
There are some policy issues associated with these creeks but that will be another post.
Lake Cavanaugh area was heavy logged in the past.  Bob and I came across this stump while heading up the slope to assess a potential debris flow source area. 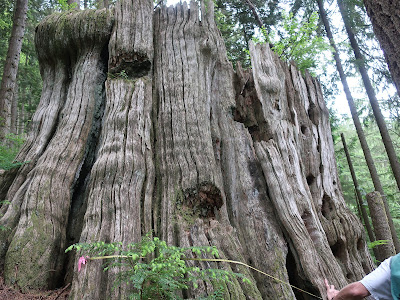 The 1941 aerial image looks a lot like a lidar bare earth image. The clear cut logging throughout the area was very intense. 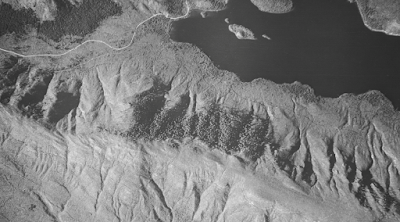 1941
Note that there was a stand of trees left on some of the steeper upper slopes (but not the ridge line) in the 1941aerial. As the forest grew back the old trees are still evident in 1974 aerial. 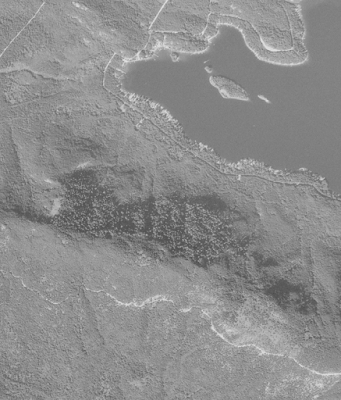 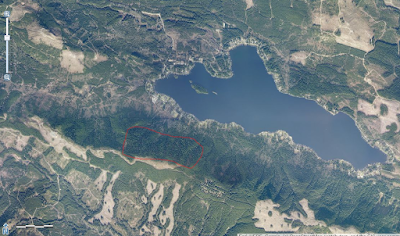 But the old trees remain. This remnant stand of old trees provides nesting habitat for marbled murrelet, an endangered sea bird that nests within old forest stands. A buffer around this habitat area is required for forest practices (proposed harvest). An added benefit is that bird's nesting presence and protection also reduces the potential for the very steep slopes from being damaged by tree harvest and has limited some of the recent proposed harvest on the north slope of Frailey Mountain.
Posted by Dan McShane at 8:15 PM