Since northwest Washington State (and more so southwest British Columbia) are experiencing a series of atmospheric rivers (AR), I have been doing a bit of reading/catching up on the subject. On a professional level ARs paly a role in my work assessing geology risk so understanding ARs is important in assessing geology hazards.

ARs have and continue to receive a lot of attention as they are the cause of much of the large flooding events of the west coastal watershed of North America and are also the source of much of the water in watersheds of the southern portions of the west coastal area. Due to the risk of large floods and the impact to reservoirs, there has and will likely be a continued interest in evaluation and understanding ARs. The most recent flooding in southwest BC and northwest Washington emphasized the importance of this issue. Further, ARs are expected to change with global warming -- there are numerous papers of modeling and climate simulations that indicate changes in ARs over past and present day.

What follows are a few papers with my own notes and what I thought to be pertinent quotes from the papers themselves.

Neiman and others (2011) focus on ARs impacts on 4 different western Washington watersheds, the Sauk, Green, Satsop and Queets. They identify some key attributes to ARs that produce floods.

"ARs were responsible for all floods in these basins during the 30-yr period, even though not all ARs during that period generated flooding. Those ARs that produced flooding typically exhibited two or more of the following attributes: (i) the AR was optimally oriented for orographic precipitation enhancement in a given basin, (ii) the low-level onshore water vapor fluxes into the basin were quite strong, (iii) the AR stalled over the basin, (iv) the melting level was especially high, and/or (v) basin soils were already saturated prior to AR landfall."

The recent AR flooding in northwest Washington and southwest BC had essentially all of the above attributes.

A figure from Neiman and others (2011) illustrates the attributions for the basins they evaluated. 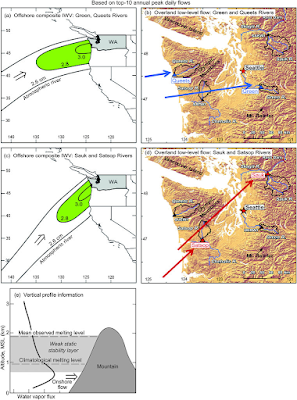 Conceptual representation of key atmospheric conditions associated with the top 10 annual peak daily flows observed in four watersheds in western Washington. (a) Offshore composite IWV analysis (cm; green shading >2.8 cm) based on the NARR for the Queets and Green Rivers. Washington State is shaded and labeled. (b) Overland composite low-level wind-flow direction (blue arrows) based on the NARR for the Green and Queets Rivers. See Fig. 3 for details on the base map. (c),(d) As in panels (a) and (b), except for the Sauk and Satsop Rivers and red arrows. (e) Composite NARR-based vertical profile information common to all four watersheds in the low-level onshore flow (bold arrow). The upper and lower horizontal dashed lines mark the observed and climatological melting levels, respectively (the climatological melting level is from Minder 2010). Gray shading represents the layer of weak moist static stability. The black curve depicts the water vapor flux profile.

Baek and Lora (2021) suggest that ARs intensity may increase sooner rather than later relative to other published papers. If their assessment holds true, changes to ARs will come sooner than most other modeling papers suggests:

"Here we use a series of coupled model experiments to show that there was little to no change in mean AR characteristics in 1920–2005 due to opposite but equal influences from industrial aerosols, which weaken ARs, and greenhouse gases (GHGs), which strengthen them. Despite little historical change, the simulations project steep intensification of ARs in the coming decades, including mean AR-driven precipitation increases of up to ~20 mm per month, as the influence of GHGs greatly outpaces that of industrial aerosols."

Espinoza and others (2018) suggest that ARs will not be as frequent in the future, but may be much more impactful:

"The projections indicate that while there will be ~10% fewer ARs in the future, the ARs will be ~25% longer, ~25% wider, and exhibit stronger integrated water vapor transports (IVTs) under RCP8.5.

Gershunov and others (2017) consider the increased trend in AR to have already begun and project the increase trend will continue. They also note that the trend will not be uniform along the west coast:

"Moreover, a long-term trend expressed broadly in stronger winter AR activity over the U.S. and Canadian west coast (weaker over Mexico) is associated with long-term warming of the western tropical Pacific; the latter SST trend has previously been identified in multiple observational data sets and explained by anthropogenic forcing [Wang et al., 2015]. Long-term precipitation changes over western North America have been very consistent with this trend. This broad increase in AR activity is corroborated by total seasonal IVT version of the analysis, where it is clearly associated with basin-scale ocean surface warming, as well as by a consistent increasing trend pattern in observed precipitation. These results suggest that the increase in IVT projected for the midlatitudes in response to global warming [Lavers et al., 2015] has been ongoing over at least the north Pacific, which calls for an investigation of the role of ARs in the projected enhancement of extreme precipitation over California and the Western U.S. [Polade et al., 2014] as well as a fresh investigation into observed changes already under way."

"Changes in precipitation totals are due to a significant increase in AR (+260%) rather than non-AR (+7%) precipitation, largely through increases in the most intense category of AR events and a decrease in the interval between landfalling ARs." 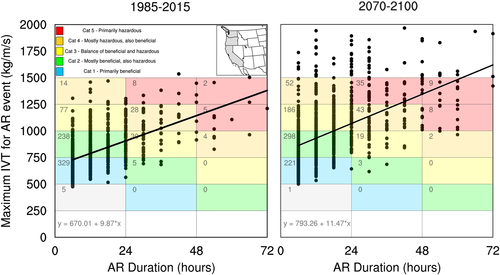 Gershunov and others (2019) also project changes in precipitation specific the watersheds on the west coast. For the the Chehalis River:

Dongyue and others (2019) did a broad overview of rain-on-snow, a possible contributor to AR flood events (see Neiman and others, 2011 above). Their assessment was not specific to ARs and covered all areas of the US subject to rain-on-snow. Cliff Mass cited this paper in a blog post suggesting that snow melt is a minor contributor to recent flooding after comments suggested snow melt was an additive factor to the recent flooding. However, despite that reference, Dongyue and others (2019) note:

"It is also clear that a significant portion of floods that occur in basins that drain the west facing slopes of the Cascades and the Sierra Nevada are ROS related."

I do agree that for the recent AR event (November 14-15) rain was the source of the majority of the water in the floods, but even a relative minor snow melt component, say 10 percent, can push a river to a much more consequential flood event.

"Historically, the contribution of ROS to extreme runoff in the western United States has been greatest in midelevation areas (1,000 to 1,500 m); this “significant influence zone” will shift higher in the future (above 2,000 m).

This elevation range matches many but not all Cascade watersheds.

The recent AR event in northwest Washington and southwest BC is a preview of what society should plan and prepare for as ARs become more intense with global warming.