Notes on the Dynamic North Shore of Bellingham Bay

A little shore bluff history review of the north shore of Bellingham Bay indicates that this a very dynamic area. Click on the images to make them larger. 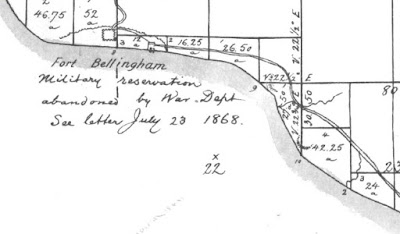 
The above early map Government Land Office map does not reveal a lot about the shore, but does note a road inland from the coast and notes the former location of Fort Bellingham. 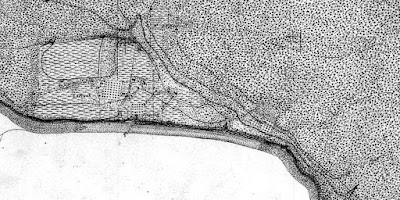 The T-Sheet map of 1887 denotes that the upland area where the fort had been located is farm fields. The stipple pattern on the shore suggests a broad beach. 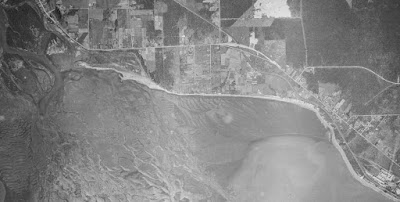 The 1941 aerial shows a narrow beach with broad tide flats can be seen. The Nooksack River is flowing onto the tide lands on the northwest part of the image. 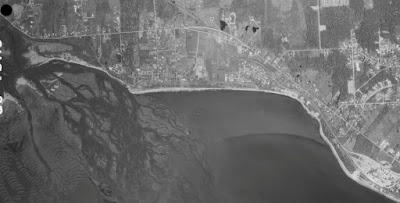 This 1972 image shows substantial apparent changes along portions of the shore. Note that the river channels have eroded into the shore along the northwest part of the coast removing the beach. However, the beach just to the right of that eroding area appears wider.

A close look at the oblique aerial from 1977 shows that the beach is covered with drift wood logs.

More change is evident by 1998. Note trees are growing out of the driftwood deposits, but that with a river channel hard up against the base of the shore bluff the west half of the beach has been eroded away.

The trend of erosion continued into 2005 making its way across 2/3 of the south facing shore, but note that the river channel is starting to split as the delta sediments pile up. 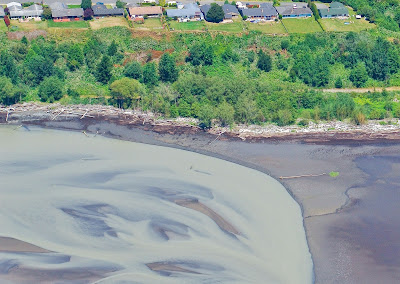 By 2014 the main river outlet channel had shifted out of the image area well to the west. Note the bright green area where the shore has built up. 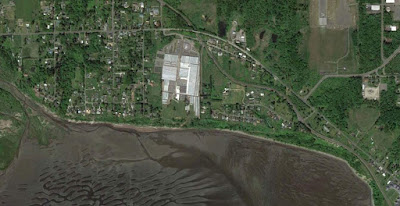 The bright green swath was apparently short lived as it is missing in the 2015 image.

Much of the "sediment" along this shore reach consists of wood. Driftwood is a big part of the material, but there is also a fair bit of small bits of wood, The source of the small wood pieces has been a bit of a mystery.

This shore reach has been dynamic and raises a number of questions in terms of what are the influences.

One is Where is all that wood coming from? Will large logs continue to be a major part of the shoreline processes at this location? Does the log deposit represent a temporary perhaps decade or century long factor? Will the site return to the condition observed in the 1941 aerial with a narrow beach?


The historic images show that the Nooksack River delta plays a significant role in shoreline processes along this shore reach. This is a very dynamic shoreline in part because of the presence of the river delta. The delta is a very rapidly growing delta due to the large sediment loads delivered by the river. As could be seen in the historic aerials, the presence of a large delta river channel within the tidal area along the shore likely contributed to erosion of the shore. That erosion has ended in the past 5 years and log accumulation appears to have begun again. This change appears to be the result of the main river channel having shifted to the other side of the delta far from this shore reach.

The significance of the Nooksack delta and its likely newness may in part explain the accretion on the shoreline taking place during historic times and suggests that shoreline processes evaluation has some complicating factors in that the processes are relatively new compared to other Salish sea shore lines.

The sediment along the beach waterward of the is derived in part from the sediment deposited by the river. However, the site is also down drift from bluffs to the southeast (Coastal Geologic Services, 2009). Erosion of the bluffs to the southeast provide sediment to the beach and that sediment is transported by wave action northwestward towards the shore fronting the bluff at the north end of the bay. Historically the source of sediment to the beach from bluff erosion to the southeast has been reduced due to shore structures in the area where the bay waterfront has been developed. Rock armoring has been placed below areas where the railroad tracks are located and thus the sediment supply has been somewhat reduced.
Posted by Dan McShane at 6:45 PM

Was the historic shift of the Nooksack to the west a human manipulation (channelization by the Corps?) or just a "natural" shift. It would be interesting to analyze the LWD on the shore and determine how much is deciduous (cottonwood/willow/alder) and how much conifer. This would have a lot to say about its source.