State Senator Doug Ericksen represents the 42nd Legislative District. The district covers most of Whatcom County minus a big chunk of Bellingham. The district is a mix of small towns with the largest area of farmland in western Washington as well as mountain slopes covered with forest land. Mr. Ericksen failed his district very badly and intentionally during the last legislative session.

Threats to farmland and timberland are often equated with development. However, by far the largest threat to farmland acreage in Whatcom County at the moment is the Swift Creek landslide. I've posted about the slide numerous times and even gave it its own label if you want to see all the posts.

The big problem with the Swift Creek landslide can be summed up with a few images: 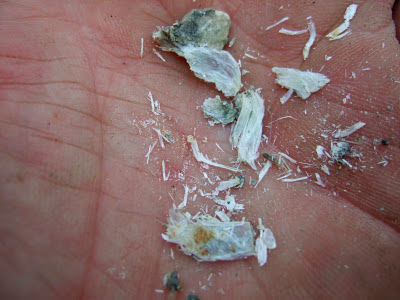 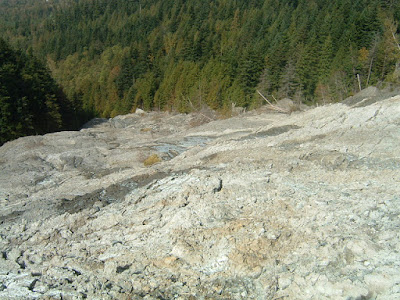 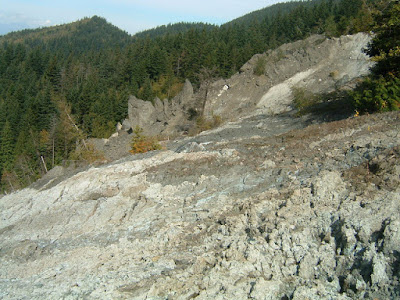 View across the lower end of the slide

One estimate on the volume of sediment being delivered to the base of the mountain by this ongoing landslide is the equivalent of one football field buried 100 feet deep every year. 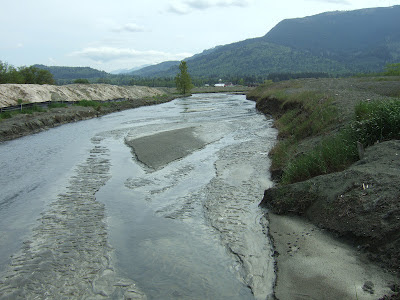 Swift Creek flowing across the Sumas Valley floor
The problem below the slide is that the low stream gradients on the valley floor cause Swift Creek's channel to become plugged with sediment. This presents a problem at stream crossings. 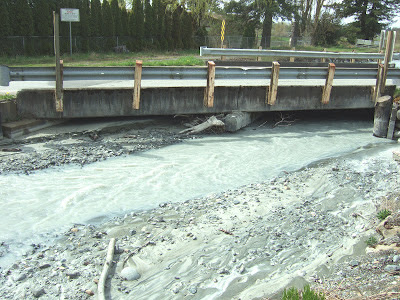 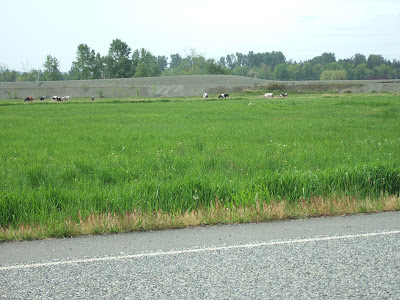 Dredge piles along the banks of Swift Creek

The above image can only partially capture the problem. So much sediment has accumulated that the creek bed is elevated above the surrounding farm fields.

There is another issue besides the asbestos. The sediment is derived from fractured serpentine rocks. This rock type has some unique chemistry and is well known wherever it occurs to be very hard on most plants. The metals ratio of calcium and magnesium cause plants to have problems, the pH is elevated and there is a lack of phosphate bearing minerals, phosphorus being an element essential to life.

Note the bare sediment piles in the images above. Nothing can grown on these piles. So besides the asbestos problem as a health risk issue, the sediment is essentially toxic to farmland soils. Notes on USDA soil mapping of the area mark areas that have been impacted by Swift Creek sediment from past floods caused by sediment filling the channel of the creek. With nothing being able to grow the sediment is subject to being blown about as dust containing asbestos fibers.

The extent of the problem is partially shown in this Google earth image:

Swift Creek empties into the Sumas River. The Sumas River itself is a slow stream flowing through an area of low gradients and the added sediment is causing reaches of the Sumas to fill with sediment. Flooding on Swift Creek and the Sumas River spreads sediment that is essentially hostile to life as well as full as asbestos fibers over farm fields, and where the Sumas River flows through Nooksack and further downstream through Sumas onto residential properties.
For a period of time the county dredged the creek at no small expense and sediment from the piles was hauled off by locals for use as fill, for surfacing driveways and roads and in at least one case as a fill for a state highway embankment. A sawmill property on the north side of the creek became concerned about flooding and began a routine dredging operation to maintain the channel away from the mill site.
All that asbestos containing material being dug up and moved around eventually got the EPA's attention which led to the Army Corp of Engineers no longer issuing permits for dredging the creek. Permits have been issued on an emergency basis as there are major roads that would be closed and uncontrolled flooding and sediment deposition has been recognized as a major problem that would also pose a significant threat.
This is where Doug Ericksen comes in. Whatcom County, the EPA and the Washington State Department of Ecology all recognize that the Swift Creek sediment needs to be managed. Allowing continued flooding and Swift Creek to flow unmanaged over large swaths of land poses a huge health risk and a huge economic loss to farms, businesses and property values. The old way of dredging and allowing the sediment to be spread with no controls is simply not acceptable under current federal law. After a lot of hard work and study an approach to managing the sediment was figured out and the governor put the funding in the State budget proposal to the state legislators. The budget item passed in the house with support by both 42nd house members Vince Buys and Luanne Van Werven.
Doug Ericksen is a high ranking State Senator with substantial authority. This should have been a no brainer, but the budget item for supporting the sediment management of Swift Creek was removed from the budget. Doug Ericksen did that and in that regard has intentionally failed his constituents. Whatcom County is left with a huge expense to maintain the creek flowing under the bridges and not burying large swaths of farmland. Several square miles of farm land are now at substantial risk of being lost. A saw mill on the north side of the creek will be at risk. A mushroom farm south of the creek is at risk. Those two businesses alone are over 100 jobs. The towns of Nooksack and Sumas are at risk and their growth plans now face uncertainty. Property owners face substantial loss in value of their land.
I can only speculate on Doug Ericksen's motives. Perhaps he has allowed his ideology regarding environmental regulation to cloud his judgment. He presumes that the EPA rules on risks from asbestos are groundless and is willing to allow farmland, businesses, two small towns and property owners to suffer the consequences. Or he has simply been too taken up with his position of power at the State level to bother getting his head around a very real and major problem within his own district.
Regardless of the speculation as to Mr. Ericksen's motives or reasoning, he has very badly failed the citizens and businesses of a significant portion of the district he represents.
Posted by Dan McShane at 9:41 AM

Dan, given the comp. plan update status and the fact that we have not determined the final population and employment projections or the UGA boundaries, I was very interested in your statement about how Doug's actions may have put Nooksack and Sumas growth at risk. If this is the case, this it is certainly an important issue to raise to the county as part of the GMA process. Can you expand on this?

Nooksack and Sumas are aware of the potential impact to existing UGAs, potential UGAs and areas already in the city. How this will be incorporated remains to be seen.