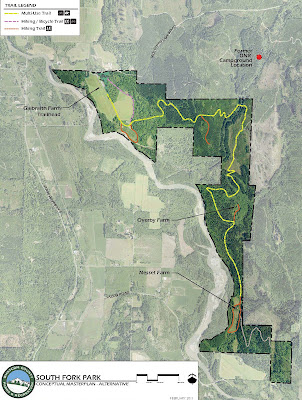 After a long haul of process, the Whatcom County Council voted 4-3 approving the the South Fork Nooksack River Park. Over the past 20 years Whatcom County has acquired much of the land on the east side of the South Fork Nooksack River from the Saxon Bridge to the Mosquito Lake Road. Those acquisitions have been via donation, purchase and reconveyance. The park plan applied to four parcels: the Nesset Farm, the Overby Farm and the Galbraith Farm as well as 287 acres of county land that had been under Department of Natural Resources management. All told this will be a 890 acre park.
The motivations behind the land acquisitions have varied. In one case the property owner simply wanted to leave the land his family homestead in intact. Another donor wanted a particular stretch of land to remain forested. Some property was acquired in part for salmon habitat and elk habitat. Some was due to flood reduction programs. Access posed a challenge to part of the land and the county requested that Department of Natural Resources managed land be reconveyed to the county for park purposes.
The land acquisitions have been consistent with several broad but very important county policies: habitat corridor between the Northwest Cascades and the Salish Sea, endangered salmon (the South Fork Chinnok are the most endangered salmon species in the County), flood hazard reduction, and County park planning.

There are plenty of people that worked hard to get these lands into public ownership. The former private property owners themselves assisted greatly making this park work. The Whatcom County tax payers certainly should be given credit for supporting a conservation tax levee that provided the funds to acquire the land and develop it as a park. The Whatcom Land Trust cobbled together and aided greatly in putting together some of the exchanges. So, Why call out kudos to one council member?  Well lots of people deserve kudos, but this park was approved by a 4-3 vote. Pete Kremen, Carl Weimer and Ken Mann all voted for the park. But that was expected. Sam Crawford's vote in favor of this park was expected as well. Did not surprise me one bit. It is entirely consistent with Sam's ongoing support of public lands.

Regular readers of Reading the Washington Landscape may recall Sam Crawford's leadership regarding support for the San Juan National Conservation Area HERE and HERE. But here is why I think Sam Crawford should be called out for extra credit for the South Fork park. We live in a society where we readily break into our tribal camps. We tend to assign various political leaders into a tribe. Sam Crawford 's tribe is a property rights tribe - they are not very keen on land use planning or development regulations. But something to think about: Maybe that type of thinking can be off set by supporting public land and the stewardship of that public land for community benefit. Maybe if we had more land in public ownership, we would not need to have so many land use rules. Maybe Sam Crawford sees a better path.

Regardless of the above tribal speculation, I know this: There would be no South Fork Park plan without Sam Crawford.
Posted by Dan McShane at 11:14 AM