Lots of discussion regarding trains in Washington State of late with the coal terminal schemes and how the coal will travel to the various sites. The coal will not be traveling on this route: 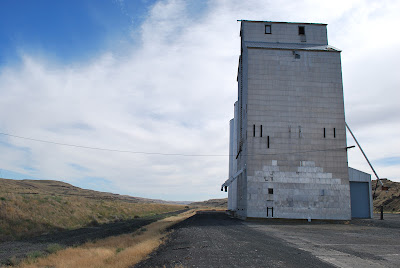 Grain elevator in Washtucna Coulee
Near turn off to Palouse Falls
This particular railroad route has an excellent gradient as it follows the former path of the Palouse River palouse-falls-remarkable-falls. However, with the dams on the Snake River the primary product in this area, wheat, is now shipped via barge along the river. Numerous large ports for storing and loading wheat line the river and many of the railroads as well as grain elevators have been abandoned.

I am not fully up on the history of the rail lines through Washtucna Coulee, but at one time both the Union Pacific and Burlington Northern (the abandoned line in the picture) had tracks following the coulee. The BN line tuned south at Kahlotus and traveled down Devils Canyon devils-canyon-south-of-kahlotus to the Snake River.
Posted by Dan McShane at 7:21 AM

this is my old route from Richland to Pullman. Bruce and George recently took us on a bus tour through here. After reading your blog, it seems we've much in common. I happened upon it (blog) while searching for info about the tremendous coulee occupied by Selah Creek.