A Moment in Deep Time: Back to Back Unconformities on Highway 174

When I told an associate about looking at the unconformity at the the base of the CRBG he noted that unconformities are "a visceral experience". It is a wondrous thing to place a finger on a point in deep time; "Here lava covered the landscape that was here before". 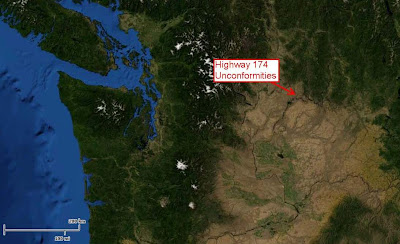 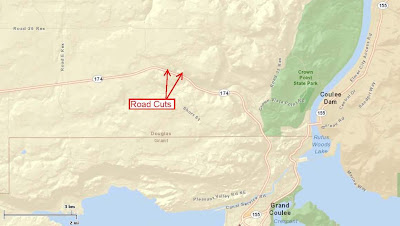 This last summer I had made several trips to the Grand Coulee area. Besides the dam and all the features associated within Missoula Floods and the great ice features on the Waterville Plateau southwest of the dam, the area is also a place where the base of the Columbia River Basalt Group (CRBG) can be observed.

There is something particularly appealing about the base of the CRBG. For one thing the CRBG covers a vast area of eastern Washington and even covers parts of the Cascade Range in southern Washington and areas of southwest Washington. Huge lava flows! All the excitement about the Missoula Floods, but underneath all those Missoula Flood deposits and land forms is another remarkable flood. Vast floods of lava that flowed out of fissures in northeast Oregon and covered everything between there and Grand Coulee Dam with lava. Lava flows that extended all the way to the Pacific Ocean. Now that is an epic flood!

The Grand Coulee Dam area is an area where the epic lava floods thinned and and ran up against the highlands of the Okanogan. The Columbia River valley cuts down through the lava to the older rocks below. It is a place where one can touch a deep moment in time.

Highway 174 east of Grand Coulee Dam takes one from the dam up a dry creek valley to the northeast part of the Waterville Plateau. The plateau is mostly underlain by glacial scoured basalt with fantastic ice-age features. The dam is underlain by granite. Somewhere between the granites underling the dam and the top of the plateau there must be a spot to have that visceral experience of touching a moment in time when a huge change took place, that point in time when a landscape was buried. Highway 174 does not disappoint; it cuts through the contact with an unexpectedly spectacular exposure plus an additional bonus of another much younger unconformity; another spot in time where everything changed. Back to back unconformities! 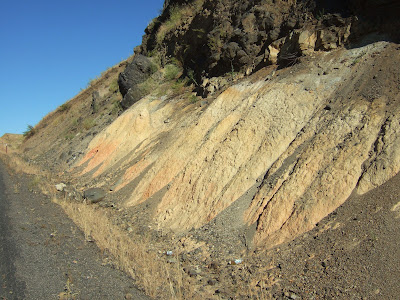 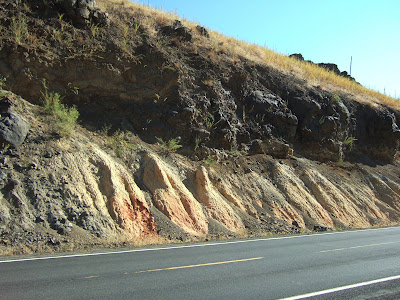 Base of basalt
Dark basalt on residuum soil
Part way up the dry creek valley is an exposure of Columbia River Basalt overlying what appears to be a reddish to buff sand. The reddish color is indicative of oxidation iron often associated with deeply weathered soils and initially I suspected this sand was a layer of sand that had been deeply weathered and had been deposited between basalt flows. I stopped and took a closer look. 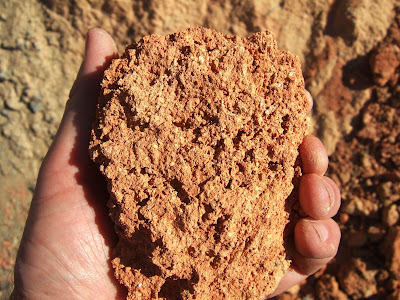 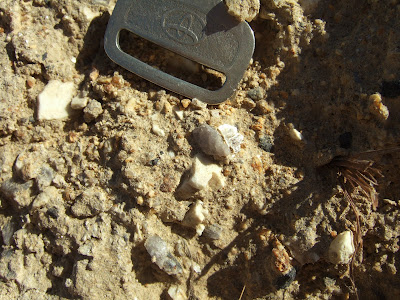 Close up view showing that the individual grains are angular minerals
The angular mineral fragments as well as the range of minerals indicates that this sand is not sediment but weathered granite - residuum soil. It is granitic bedrock that had been deeply weathered into a soil. A soil that was formed from the weathered granite underlying the soil. A soil that was 15 million years old. 15 million years a go lava flowed over this soil and buried it. I could touch that moment in time.
A fantastic unnconformity with 15 million year old basalt overlying 45 to 50 million year old granite. The soil horizon of deeply weathered granite made it all the better. The only thing missing were fossils (another site for that). The very next road cut to the west provides a view of another unconformity. 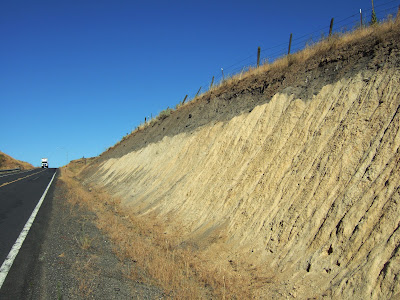 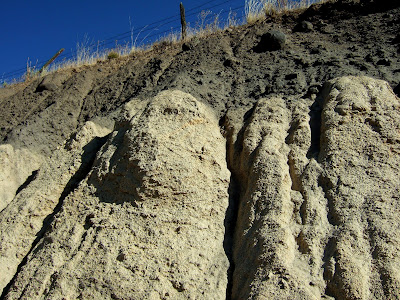 Here the highly weathered granite begins to look more like rock than the reddish sand. 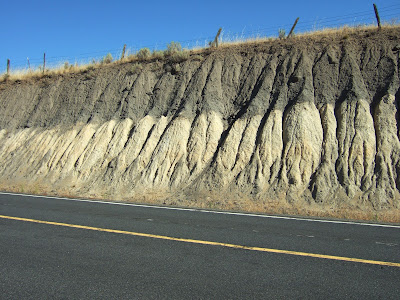 Instead of basalt overlying the granite as a 15 million year old unconformity, this unconformity is glacial till over granite - perhaps 17 thousand years old. The gray color is due to the till consisting primarily of ground up basalt 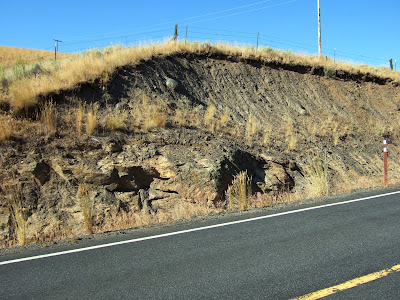 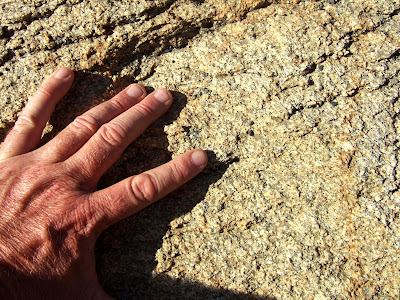 The unweathered granite
Posted by Dan McShane at 9:33 AM

Very cool! Thanks for sharing this. I can use this as an example of unconformities and geologic time in my Geology of the PNW classes.