A few weeks back David Tucker posted a query regarding big erratics located within the Puget Sound area. He has done some nice write ups on our local glacial erratics including ones I would recommend. So it took me a few days to think of some. Some of my favorites are resting on the mud flats of Drayton Harbor southwest of Blaine, but an impressively large erratic is located north of Hood Head on the west shore of the upper Hood Canal. It is so big and prominent, you don't have to take a field trip to see it. You can see it using Google Maps or Bing Maps. 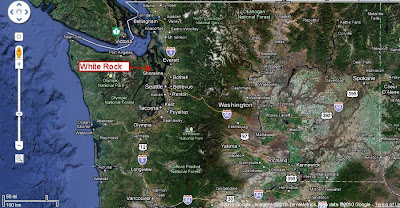 White Rock. Compare to house and cars on lower left for sense of scale.
I have been near the rock but never during a low enough tide to know exactly what it is made of. The rock is off of Paradise Bay Road, the first right after crossing Hood Canal Bridge heading west. Washington State Parks owns a stretch of shoreline property to the south of White Rock including the estuary area between Hood Head Island and the mainland south of the spit in the middle image above. The park is undeveloped, but there is access. From there a walk along the shore will get you to White Rock. I have not tried this approach, but it is on my list. My previous route was via a landslide on the bluff that involved technical crawling through mud and thorny brush - not reccommended and it was across private land.
Posted by Dan McShane at 12:15 PM

That's one of the greatest things I've ever seen. Field trip!

If we could just get higher resolution sat images we could identify the rock without ever leaving our keyboards.

Via Dave Tucker-
I measured White Rock erratic using Google Earth’s path tool. The most precise [but is it accurate?] measure I got was 55.79 feet across. No height data, though. In comparison, the brutish Aldergrove erratic is 36 x 40 x 26 high, and Whidbey’s monstrous Waterman Rock, the reigning champ, is 60 x 60 x 33 high. So, on-the-ground measure of White Rock is clearly needed. Using the ‘clock face’ time travel tool in GE, you can see that on some dates, at least, White Rock is accessible on foot. Don’t know about climbing up the dang thing, though. If one of you get there first, be sure to take close up photos of the rock surface [with scale], as well as overviews [with scale]. What kind of rock is it? I’m sure Dan and I will be happy to post your photos on our respective websites.
Dave Tucker
www.nwgeology.wordpress.com