Wild Horses and Prairie In the Sky 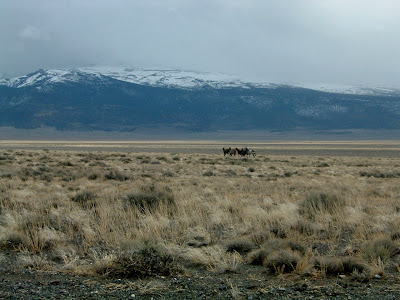 Wild horses gathered together and on the run - central Nevada
The New York Times had an article on wild horse roundups HERE. The issue has been receiving new attention due to costs and various opinions as to the best management strategies. Large wild horse populations are present in large numbers in the Basin and Range provence in Oregon, Nevada and California.

How about Washington State? Up through the 1980s a small herd lived on the Hanford Atomic Energy Reserve, but has since been removed. The reserve is one of the largest in tact wild land areas in eastern Washington and in 2000 a large portion was designated the Hanford Reach National Wilderness Area.

Wild horses live on the Yakima Indian Reservation and there are wild horses on the Colville Indian Reservation. Both reservations have extensive wild land areas. The Yakima wild horse herds have grown substantially and are having a profound impact on the landscape as bunch grass is being grazed at unsustainable levels. The number of horses has been estimated to be on the order of 5,000.

Horses were for a period of time highly valuable and northwest First Nations peoples readily adopted to this new animal that arrived with the Spanish in the southwest in the late 1500s and 1600s. By the time Lewis and Clark traveled through the area of southeast Washington, the First Nations peoples in the area were managing large herds. Our image from first written accounts of the First Nations are associated with horses. Life in eastern Washington must have been substantially different prior to the arrival of the horse in the 1600s.

The initial horse herds would have been managed as a valuable resource. Some horses may have wondered and become wild, but the numbers would have been limited due to their value. With the arrival of the beast of steel and paved highways, horses declined in value and remnant herds faded into the wild land in out of the way places. The horses adapted with the ones best suited for living in those harsh areas surviving and in recent decades rapidly multiplying. The Yakima Nation is, like the Bureau of Land Management in the Basin and Range, trying to reduce the size of the herds on their lands.

As I wondered through the Horse Heaven Hills of south central Washington recently I had Mary McCaslin's Prairie In the Sky running through my head as I thought of the wild horses and the role horses have and continue to have on the Washington Landscape.

"Up through the 1980s a small herd lived on the Hanford Atomic Energy Reserve, but has since been removed."

Why were they removed?

At the time most of the Hanford area was being managed as a preserve and it was felt horses were inconsistent with the natural reserve. The horses were removed in the late 1980s. A similar debate has taken place elsewhere in the west, but on on most public lands the horses have been allowed to remain.

Do you think part of the issue surrounding their removal had to do with the fact that they could potentially have become contaminated? I've read that contaminated coyotes and rabbits have been found on the site and have had to be removed and disposed of as toxic waste. It seems like the horses could have posed a real issue for the area if they got into contaminated materials.

The horses ranged over the entire area and spent most of their time in the natural area preserve away from the 200 Area and other contamintated areas. I believe there was some effort to keep horses away away from the more contaminated areas as your are right about rabbits and other animals. Ducks and Gable Pond were a concern as well.