Fog on the Horse Heaven Hills south of Benton City

Last week I posted a bit on having a sunset picnic on the hinge of the Horse Heaven anticline just south of Benton City. I have a different view of the same location from late last fall. 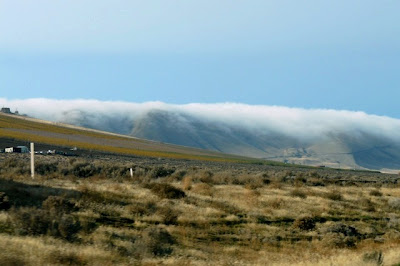 Fog on the crest of the Horse Heaven anticline south of Benton City
The fog bank covered the ridge line for well over 24 hours. Having lived within view of the Horse Heaven Hills, I know that this is not an unusual scene. During the winter air flow from the southwest out of the Columbia Rover Gorge rises up the south slope of Horse Heaven anticline and cools enough to begin condensing. Then as it descends the north slope of the anticline it warms and evaporates before reaching the valley floor.

McBee Road can be seen angling up the slope in the right portion of the picture. The lumpy area on the lower part of McBee Road is an old landslide deposit from the slope above. Lots of slides in this area are associated with the Missoula Flood; however, this particular slide came off a slope well above the flood elevation. The bedrock on the crest of the anticline is highly fractured and the slope is steep. 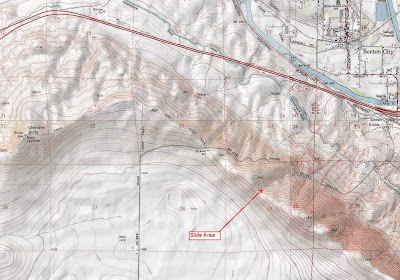 The slopes of the ridge at this location are predominantly bunch grass. The land in this area is managed by the Bureau of Land Management (BLM). Relative to Oregon, Idaho and other western states, Washington State does not have as many large tracts of BLM land. As evidence in the picture below the grass land is in good condition, but I do not know the details of the BLM management plan for this area. There currently is a weather tower on the summit ridge likely doing a wind study so windmills may be in the future on the ridge line of this BLM land. 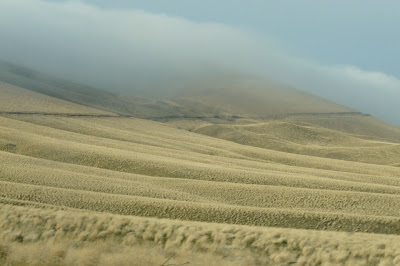 Bunch grass on the slopes below McBee Road
We made the drive up the ridge last fall into the fog. The temperature in the valley was mild - upper 50s. The ridge line was just at freezing with just the beginning of ice rime formation. When I lived in this area, my mates and I ran these ridge lines in the winter and often ran through ice fog like that seen above. We would be completely covered with frost except our skin.
Posted by Dan McShane at 2:24 PM