Picnic at the Hinge in the Horse Heaven Hills Anticline 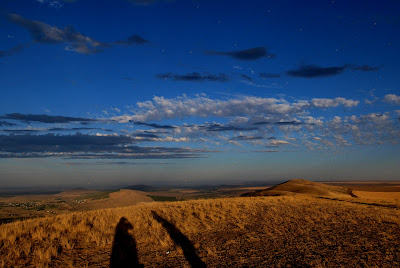 Casting Long Shadows at the Crest of the Horse Heaven Anticline south of Benton City
Earlier this month after a hard day of work in eastern Washington (not really) Lisa and I headed up for a sunset picnic on the hinge of the Horse Heaven Hills anticline. The Horse Heaven Hills are one range of hills and bluffs that is part of the Yakima fold belt. The Yakima fold belt consists of a series of generally east-west trending anticlines and synclines that fold the landscape of south central Washington. The anticlines have relatively gentle south slopes and very steep north slopes with broken rocks and faulting. The folding has been going on a long time with north south compression dating back to and during the eruptions of the Columbia River Basalts 17 million years ago (Reidel, Campbell, Fecht and Lindsey, 1994).
The folding has created landscapes that are being modified today. The elevation changes create micro climates and changes in soil types that have defined grape viticulture areas as well as funnelling wind that is now being developed as wind farms. Another attraction of the anticlinal ridges is the relatively natural setting they have preserved. Most of the scrub-steppe habitat of eastern Washington has been supplanted by farming and towns, but the ridges have remained un tilled and although perhaps over grazed in the past are the areas where the scrub-steppe has remained somewhat in tact.
For our sunset picnic we headed up McBee Road to just east of Chandler Butte. We walked the ridge line to a summit area. What the pictures do not capture is the fact there was a major ant hatch with swarms of winged ants drifting along the ridge line. At times I felt like the grill of a car covered with sticky ants and ant wings. But as the light faded and a very slight breeze started, we were able to enjoy our food and the sunset over the Yakima Valley with views of Red Mountain, Rattlesnake Mountain as well as the big strato volcanoes of Rainier and Adams.
The spot we chose is at a hinge in the fold. The Yakima folds trend east northeast until bending to the east southeast. This bend happens to coincide with the Olympic-Wallowa Lineament, a feature that drives all sorts of geo speculation and head scratching. Our picnic spot on the northern most portion of the Horse Heaven fold provided a great view of southern Washington. I have a fond memory of this spot as it was the location where I went to see the total solar eclipse in 1979. 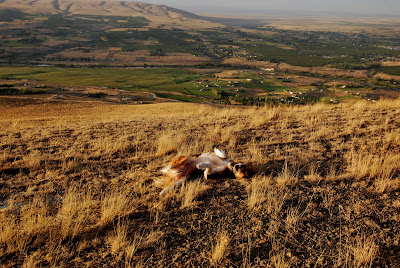 Sam enjoys a back stracth above the Yakima Valley 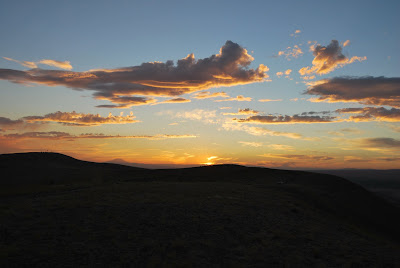 View to the west with Mt Adams and Rainier on the horizon
﻿
Posted by Dan McShane at 2:29 PM