A Stop at Deception Pass

I travel to Whidbey Island via Deception Pass on a routine basis. Due to routine and familiarity, I forget what an amazing site the passage is. Last week I stopped at the bridges. The pass is spanned by two high bridges across a very small island in the middle of the passage. The bridges are about 160 feet above the water. The tide was flowing in to the east at the time of my visit. 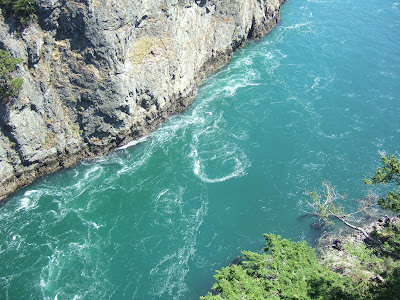 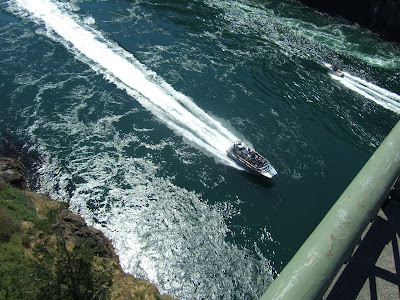 View of Deception Pass, south of Pass Island
with waving tour boat passengers
The rocks lining the passage are part of the Fidalgo Ophiolite Complex of Brown and Others. The ophiolite is a stack of ocean crust rocks from the ocean basement through the sediment deposited on the ocean floor and has been estimated to be Jurrasic, roughly 150 million years old. This ocean floor assembly was likely accreted onto the edge of North America in the northern California area and then was transferred northward via lateral faults and thrust into its current position in the late Cretaceous (65 million).
The vegetation between the steep north facing slope and steep south facing slope is markedly different. Of course the north facing slope is cooler and moister so is completely covered primarily by Douglas fir. The warm south facing slope is grass, bare rock, rose, stunted Douglas fir and madrone. 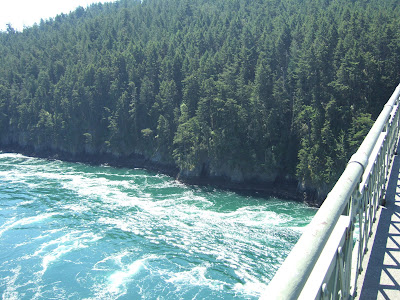 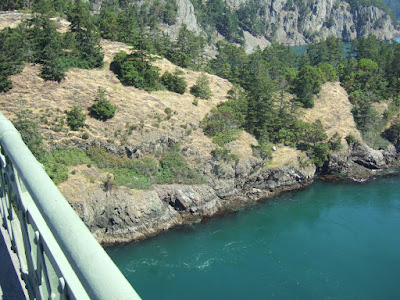 Open woodland and bare slopes facing south.
This sharp contrast is not the norm in western Washington. Rainfall at this site is about 22 inches a year so it is dry enough that slope aspect becomes important for tree coverage. The drier weather here relative to most of the rest of western Washington is due to a the rain shadow caused by the Olympic range to the southwest. Rainfall at Oak Harbor a few miles to the south is barely 20 inches per year compared to Seattle's 36 inches. Oak Harbor is dry enough that oak trees grow on the south facing slope within the town. The dryness is partly off set by the cool climate and infusion of fog in the summer as this area is open to the ocean via the Strait of Juan de Fuca.
The dryness and tough growing conditions impressed upon me the flexibility of Douglas fir as a species. I observed a Douglas fir growing as essentially ground cover cones and all on the upper slope of Pass Island. 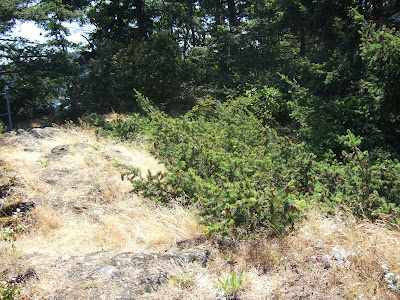