Landslide from the Thirsty Woman

Last week I stopped in Mosier, Oregon to enjoy a cold beer at the Thirsty Woman. I sat outside on the steps and while sipping my beer looked north across the Columbia River Gorge to the Washington side. With the late summer evening sunlight it was easy to recognize the very large landslide across the river. 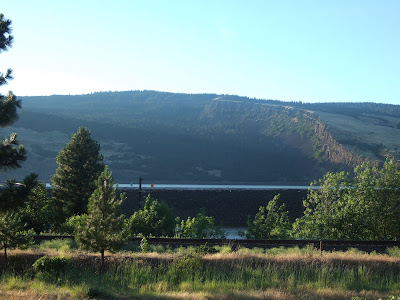 Part of very large slide area across from Mosier, Oregon
The slide area is a dipping slope between basalt lava flows of the Columbia River Basalt Group. The upper slope above the cliff consists of Wanapum Basalt and is approximately 14.5 million years old. The lower bas of the slide consists of the upper portion of the Grande Ronde Basalt. The failure likely took place along a weathered bed of weak rock between the flows. The lower portion of the slope was eroded during one or several of the Missoula flood events that deepened and widened the gorge. There are numerous slides within the gorge as a result of the Missoula Floods erosion. 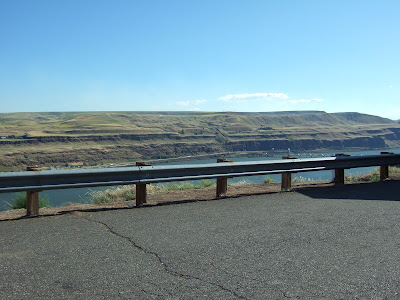 Slide on the Oregon side that involves just the upper slopes of the gorge.
This site is east of The Dalles and just east of Cello Village.
The slide area is the lumpy portion of the upper slope and includes a debris flow levy that flowed down over the lower cliffs.
A number of very large slides are located to the west near Bonneville that I posted on previously Here. On this trip I took a out the window shot of the slide scarp area above the Bridge of the Gods slide area. The Bridge of the Gods slide blocked the river entirely and it is likely that the slide near Mosier did the same. 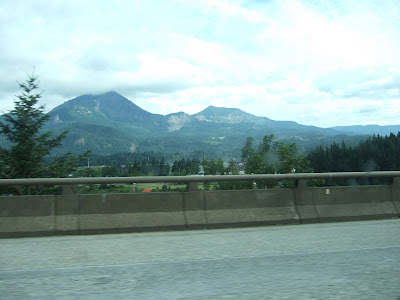 Large slides are a common feature in the gorge and can be readily seen if you your looking for them. The raw scarps above the Bridge of the Gods landslide complex attest to the recentness of the event. Another slide at the same location at a similar scale would be an impressive event and would be comparable if not bigger than the Mount Saint Helen's eruption.
Posted by Dan McShane at 6:58 PM