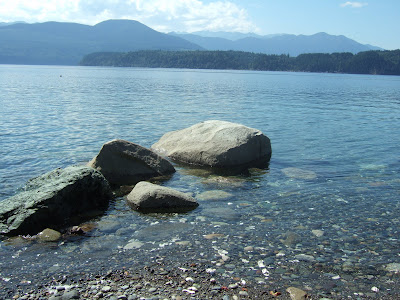 Yesterday's Swimming Hole
I spent yesterday on the northeast side of the Olympic Peninsula. One project involved hiking down from the top of the Toandos Peninsula to the east shore of Dabob Bay. Being a sunny warm day I took a swim out into the bay from the location pictured above. It was nice to have a set of glacial eratic boulders to start my swim. I simply hopped onto the rocks to remove my boots and clothes thus avoiding sharp edged oyster shells and gravel on my tender feet.
The water in Dabob Bay is warm. None of the usual northwest numbing and taking your breath away. A nice treat as I swam out to the middle of the bay and back in comfort for a good half hour in the water. The water is warmer here than elsewhere in the Salish Sea and Puget Sound because in the summer this area is one of the warmest places in western Washington.

In the summer the Hood Canal area gets warmer from adiabatic warming of the air as it descends the east slope of the Olympic Mountains when there is a general westerly flow of air. The broad tide flats at the north ends of Dabob Bay and the adjoining Quilcene Bay adds to the warming of the water along with the more enclosed nature of the upper Hood Canal and Dabob Bay. During rainy periods with rain approaching from the southwest a rain shadow develops to the northeast of the mountains. Rain fall in Quilcene is 54.4 inches per year and in Port Townsend it is19.3 inches. So while I have experienced the positives of warmer weather near Quilcene I have also experienced the much harder rain fall and snow fall in the winter.

Plants are different in this area as well with evergreen huckleberry and rhododendrons being a predominant understory plant in the forest around Quilcene and areas of poison oak being common especially to the south in the Brinnon area and on steeper sunnier slopes where it can be the dominant vegetation in clear cuts.

Google Map of Toandos and Dabob Bay. The tip of the peninsula is less than 20 miles from downtown Seattle, but the nearest gas station or small grocery is 22 miles by road.
Posted by Dan McShane at 3:04 PM

The Boy Scouts built their Camp Parsons on Dabob Bay in 1919. It looks like they picked a pretty good spot.

Please come back and see us here in Qilcene again soon! I live on the Toandos peninsula. Its wonderful. I enjoy your blog and was thrilled to see this mention of our special place. Thank you very much!! Bonnie