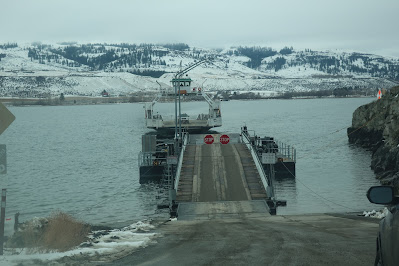 Ferry landing on the north side
A ferry has operated at or very near this site since at least 1890 (https://www.historylink.org/File/11072). In the early days the crossing was classic cable system that used the powerful flow of the river to drive the boat attached to a cable across the river. 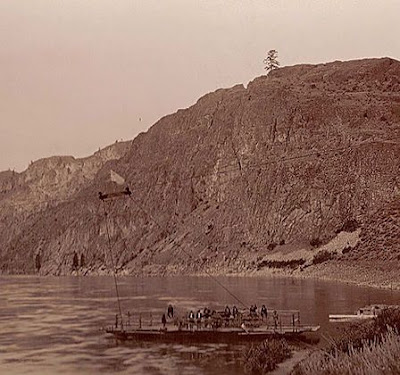 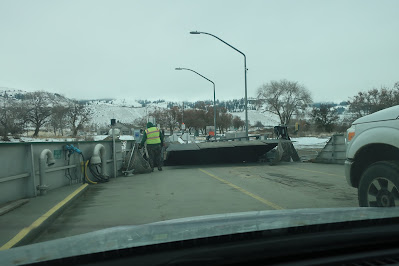 The dock on the south side 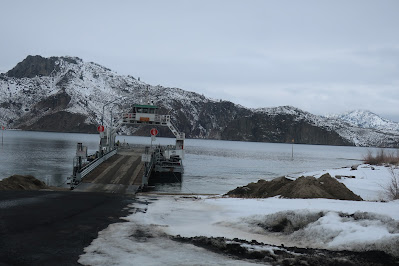 Looking north across Lake Roosevelt
The ferry is free. As noted in the History Link, the ferry began operation as a free ferry in 1930 due to a restriction on federal funds for the overall improvement of the highway. The ferry also runs 'on demand'. If you pull up to the landing the boat captain will proceed over to pick you up.
Highway 21 is not a heavy traffic route, particularly in winter like the day of my crossing. Further, the road up from the Columbia River to the high plains to the south is a steep 1,100 foot climb with hairpin turns. However, this route in the late 1800s and early 1900s was good way to get into the mining districts of the Okanogan Highlands and was also a route to move sheep mostly from the drier plains to the south across the river to the moist high summer meadows in the mountains of the Okanogan Highlands.
Posted by Dan McShane at 9:41 PM

Walt Kik has a story about a farmer that drove a steam tractor all the way down to the Keller ferry but it was too heavy.