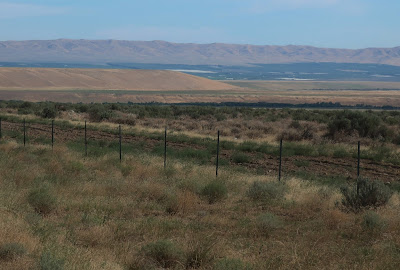 View of eastern end of the Priest Rapids Bar.
The bar is the yellow/tan flat top hill.
Columbia River can just be seen in the foreground, the dark green is irrigated lands on the Wahluke Slope and the mountain ridge is the Saddle Mountains.

The Priest Rapids Bar is a sand and gravel deposit that formed as flood waters from the ice age floods slowed after funneling through Sentinel Gap, the narrow gap where the Columbia River flows through the ridge of the Saddle Mountains. The gravel bar that formed is about 300 feet high. The picture above was taken from another gravel bar where the water flow slowed further has the land opens to the south.

DEM showing Sentinel Gap and the Priest Rapids Bar down stream of the gap.
Saddle Mountains are on the north

Bar is outlined in red 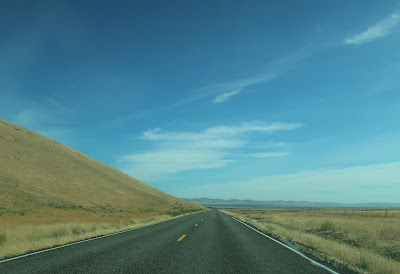 Highway 24 continues north across the Columbia at the Vernita Bridge and the turns east along the base of the large gravel bar. 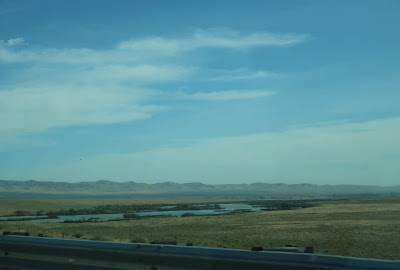 Just east of the bar in low area is Saddle Mountain Lake. The lake is located in a low area formed by the flood deposits and later smaller flood or late stage flood erosion. The lake receives irrigation water from a system of canals that provides water to Wahluke Slope and is part of the Columbia Basin Irrigation Project associated with Grande Coulee Dam.

Sorry, where is the bar in the second image?

Outlined in the second image