The Seattle Times ran an article on the ongoing glacial research is the North Cascades:  seattletimes.com/seattle-news/science/disastrous-low-snow-heat-eat-away-at-northwest-glaciers.

The combination of very little snow last winter and very warm temperatures through the winter, spring and summer have been cause for questions about how our Cascade Range glaciers are doing. Mauri Pelto's work in the North Cascades over the past 30 years has been gaining attention and this year sort of upped that interest - hence the Times article. 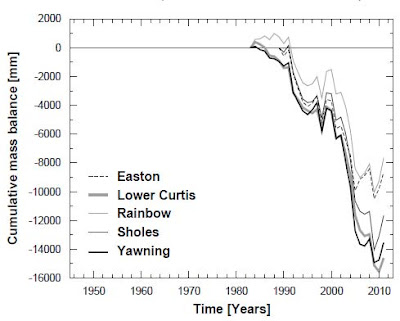 The Easton, Rainbow and Sholes are Mount Baker glaciers. The Lower Curtis Glacier is located on Mount Shuksan east of Mount Baker. (Note that Curtis is named for Asahel Curtis. Curtis took numerous photogrpahs of glaciers throughout the Cascades and Olympics as well as important images of development in Seattle. He was Edward Curtis' brother). Yawning is a small glacier near Cascade Pass near an area of lots of big glaciers.

Prior to the mass balance measuring, all we have regarding quantitative measurements of glacial mass in the North Cascades is from the South Cascade Glacier (wikipedia.org/wiki/South_Cascade_Glacier). The South Cascade Glacier has been steadily monitored since the 1950s and has shown an overall decline in ice volume since the 1950s. It has has the longest monitoring record of any glacier in North America. But that record shows how little glacial trend data we have.

Without mass balance data, glacial extent or area has been used to get a general sense of glacial ice trends. Harper (1993) (Link) provides a good overview of some of the trends in glacial ice in the North Cascades from other workers as well as his own evaluation of old aerials from Mount Baker. The short story is that most North Cascade glaciers appear to have gone through a period of retreat to about 1950 from previous Little Ice Age expansion. Post 1950 glaciers on Mount Baker as well as the Curtis Glacier noted above. advanced until about 1980. Since the mid to late 1980s the overall trend has been retreat. Harper just caught the beginning of that trend.

The annual mass balance measurements of three of the Mount Baker glaciers that Pelto has been monitoring does vary from year to year, but the overall mass balance of the three glaciers have all declined with more years being negative and more large negative years. 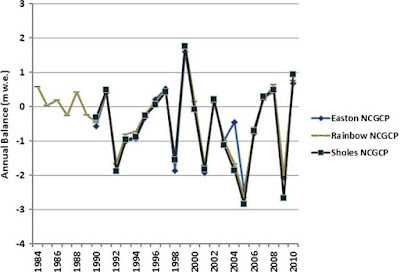 I pulled up the Wells Creek SNOTEL snowpack data to do a little comparison with the Mount Baker ice balance shown above. Wells Creek is fairly close to Baker and is relatively high in elevation compared to other SNOTEL sites.

The ice balance gain of over 1 meter water equivalent in 1999 corresponds with a big snowpack year at Wells Creek.  The 1 meter gain in 2011 also matches a big snowpack year. Low snowpack years also correlate with big ice loss years. And more years have been losses than gains with more bigger losses than gains. The 2015 loss this year will take a lot of big snowpack years to make up. So while this year delivered a big blow to the ice mass in the North Cascade glaciers, the trend of ice loss was already ongoing. While the short record of SNOTEL sites as well as quantitative mass balance measurements makes definitive trends hard to figure, the data strongly suggests that glaciers on Mount Baker are out of equilibrium with current climate. How much of current climate is shifted due to global climate change versus local variability should give atmospheric and glacial folks lots to work on.