Kennewick, Washington was for a long period of its history subject to floods from Zintel Canyon. The Zintel Canyon watershed south of a narrow cleft in the first ridge of the Horse Heaven Hills covers an area of approximately 18 square miles of the higher portions of the Horse Heaven Hills including portions of the south slope of Jump-Off-Joe kennewicks-mountain. I went through the map exercise of roughly outlining the upper watershed boundary.

Water flow in the upper watershed is very rare, but has taken place often enough that building through central Kennewick was restricted due to the potential for flash floods coming out of the hills and down through the canyon into town. The flood were not huge, but Rainier Street was built like a large paved canal to capture the flood waters and convey the water through a residential neighborhood.

Flood waters that flow down Zintel Canyon are from two types of events. The more likely is from rare intense summer thunderstorms that might happen to stall over the upper Horse Heavens. The other source of water flow is from rapid snow melt. Rapid snow melt is common in this low area of eastern Washington that is also subject to sudden warm winds after long cold periods. What is less common is having enough snow in the dry climate to generate enough water. But despite the uncommon occurrence of these types of weather, water has flowed down through Rainier Street 7 times.

The Army Corp of Engineers got funding for the Zintel Canyon Dam after many years of study and built the dam for $7.3 million. The dam was completed in 1992. As far as I know the dam has yet to stop any flooding. 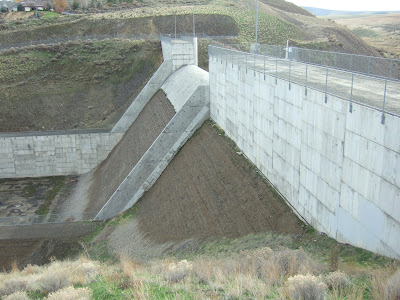 Zintel Canyon Dam from the west 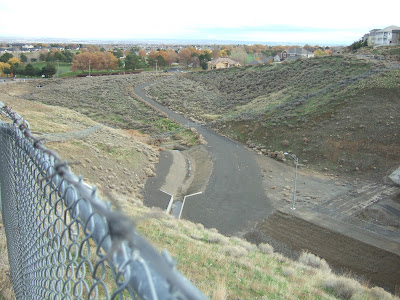 wow, I took a trip up the Snake a few years ago and photographed a number of dams along the way. This one was the most puzzling. Nice to hear the story on it! I'll bet the construction of this made everyone's insurance in the downstream neighborhood go down a tick.

I'd like to shake the hand of that cement salesman, legendary status to a guy that convinces people to build a huge dam in the desert that doesn't have any water behind it.