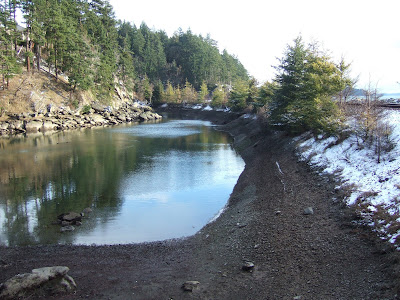 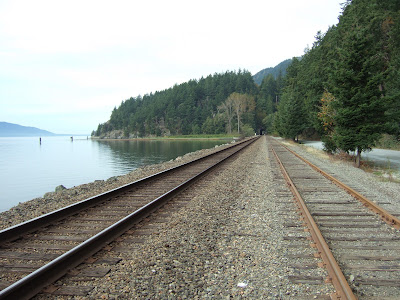 BNSF rail line south of Bellingham with siding on an otherwise single track line
My post on coal terminals in Washington State had a number of readers sent to it by John Stark's Bellingham Herald Political blog. Mr. Stark has been covering the issue of a proposed coal terminal site at Cherry Point for the Bellingham Herald and had written an article in Tuesday's paper. The article was about some elected officials supporting the terminal.  Its a bit hard to call it proposed at this point as there is yet to be any application submitted to evaluate. But it is my understanding that the investors are considering a 25 million ton per year facility for shipping coal to Asia markets. If this is the size of the Cherry Point facility, it is 5 times larger than the officially proposed coal terminal in Longview.

Rail transport, CO2 and fragmenting of the project review are being challenged to the State Shorelines Hearings Board for the proposed Longview coal terminal. In Longview, the Cowitz County Planning Department determined there would be no significant impact from the proposed 5.7 million ton per year coal terminal. The CO2 emissions and transportation impacts along the rail route were not included in the permit review nor were the dredging and pier work which will be reviewed under a US Army Corp permit. An added part of the appeal will be that the appellants obtained documents that the corporation was considering not a 5 million ton facility but a 60 million ton facility. Washington State has intervened in the case over the CO2 emissions. Washington State has set a goal of reducing CO2 emissions and that is the State's basis for intervening.

Thus far the Cherry Point project in northwest Washington has consisted of a PR (public relations) campaign to line up early support for the project by influential people. The mayors of Ferndale and Lynden are enthusiastic supporters with their pictures and quotes on full page newspaper adds. The mayor of Bellingham has added his conditional support with concerns about the rail traffic through Bellingham.

But at this point no application has been submitted or any public documents regarding specific plans or impacts or mitigation of those impacts. The concept of the PR campaign is to build support ahead of time. In that regard the Cherry Point coal terminal proponents have been fairly successful getting influential people to be supportive and they certainly got the local daily paper editorial page folks on board.

There is more to this type of strategy than simply getting support. Large complex projects with wide ranging impacts often involve public process. Getting influential people behind a project early can be a way of tamping down objections not only at the pubic level but within the permitting process itself. This approach puts added pressure on permit review staff to not push as hard as they otherwise might. Of course pressure the other way from citizens concerned about impacts might pressure permit review staff to push harder for mitigation. Reviewing permit applications in a politically charged environment can not be a particularly easy task, particularly when higher ups have apparently already decided a project is good or bad before any review has taken place. I have been in a similar position as a consultant on a few occasions - causes one to choose words very carefully when writing reports or speaking.

The Bellingham Herald published an editorial Sunday in support of the Cherry Point project. The Herald touts the jobs that the project would create. The Herald editorial was well in keeping with creating a bit of political or community pressure. In the editorial the Herald complains "Already some members in the community have filed complaints about the proposed terminal - everything from environmental impacts, to increased train traffic..." I'm not sure where complaints are "filed" when there is no project application.


The Herald then added "We hope Whatcom County's strong anti-development community will set aside a penchant for grandstanding and filing lawsuits," and "Rather than holding protests, let's sit down at the table and work to get the project built". A bit of a preemptive verbal strike at anyone that might ask "What about...?" The Herald leaves the impression that lots of grandstanding, lawsuits and protests accompany any development project in Whatcom County. Having been involved in a variety of local issues involving development, I have not seen any protests. It appears that making public comments is the Herald's definition of grandstanding. In regards to lawsuits, that is sometimes part of the public process particularly when project proponents do not address all impacts and through political pressure get government officials to ignore the issues as well. But I will add, that at my count there have been far more lawsuits filed in Whatcom County by developers than anti development people.

If the Cherry Point coal terminal proponents bring forward a project that mitigates the train traffic impacts, fishery impacts, and CO2 impacts being raised on the Longview project they will have a significant leg up on obtaining an unchallenged permit. But at this point it is impossible for this project to be assessed as no application and proposed mitigation plans have been submitted for public review. But Cherry Point proponents have thus far put together a very impressive PR campaign.

But do not get me wrong, there is nothing wrong with a good PR campaign. A few years ago another project at Cherry Point was being touted - a natural gas power plant. That project also had a significant PR campaign, but part of the PR campaign involved listening to concerns ahead of time. The project application addressed the concerns raised by local citizens and in the end sailed through the permitting process. A very similar project proposed in Sumas had a strong PR campaign and chose to ignore a slate of impacts raised early on by the community. That application had the dubious honor of being the first power plant proposal ever turned down by the State panel that reviewed the application. 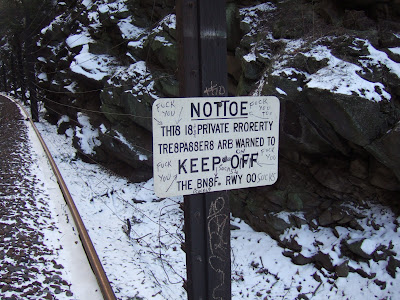 Not everyone is a fan of the rail road
Posted by Dan McShane at 11:19 AM

Excellent points, Dan. Talk about grandstanding, why doesn't this company just do the environmental work they've been stalling on for ten years instead of buying off the daily paper of record (and presumably of investigative research)?

Thanks for posting this, Dan. This was a bad project at 25 million short tons, but SSA Marine just released revised figures today that say 54 million metric tons. The bad just got worse.