I roughed in the route of a 1824 Hudson Bay Company expedition from Fort George, the former Fort Astoria trading post, to what was later to become Fort Langley via Journal of John Work, November and December, 1824 via T.C. Elliot, 1912. 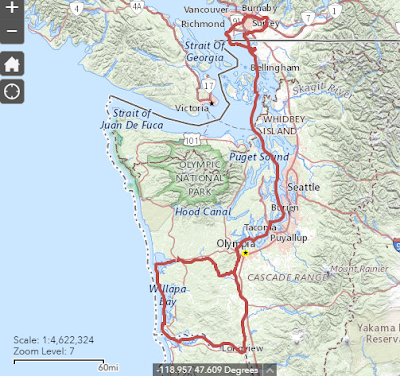 Part of the scheme was to find the location of a trading center fort on the Fraser River that could receive export goods (furs) from the interior of western North American. Hudson Bay Company (HBC) was already concerned that the lower Columbia would end up in American possession. In part because Fort George was originally an American establishment. In addition, at that time navigation from the sea to the lower Fraser was far superior to the harrowing crossing of the entrance to the Columbia. However, while the Fraser River was a better sea access point, the Fraser River was not a good river transit route.  While a fort ultimately was built, Fort Langley, the Fraser proved to be an impossible navigation route from the interior.

The journal is a window to a different time, and for that matter a different place. I have been fascinated by the diversity of the people and interactions that took place in the brief period from 1790 to 1825. The assembled team for the venture clearly had a pretty good idea of the route they should take. The team included several Hawaiians (Islanders) as well as an Iroquois hunter and his slave.

Note the time of year they traveled, November-December. While it does rain in November and December in western Washington, the outer coast and the southwest part of the state gets 'heavy rain', a term that Mr. Work used in his journal of his venture (correct spelling of his name was Wark). This was a hardy group. I contemplate how I would have performed portaging across wet ground and along shorelines, rowing for many miles, and camping in the rain, the heavy rain.

I very much enjoyed 'First Cow'. I watched it the evening before I wrote this post. It was a bit of a coincidence as I did not select the movie.