Much of Washington State enjoys views of volcanoes. In northwest Washington, Mount Baker is the scenic mountain. I can see its summit from my office window although much of it is obscured by intervening lower mountains. The view of Baker is typically better a bit further back from the mountains. Crossing the Samish Flats in Skagit County, I had a nice view of the mountain through a gap in the Northwest Cascades. 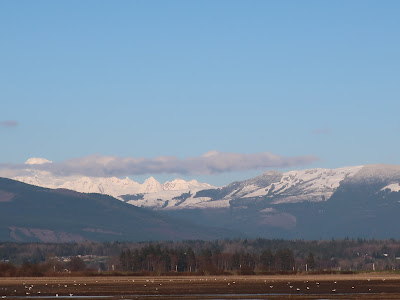 Mount Baker on the left with summit just above the cloud.
Jagged peaks in the center are the Twin Sisters

Seeing Baker on a clear late winter day is great. While taking in the view of Baker, it crossed my mind that the other volcano I had observed earlier in the day was about the same distance away as the view I had of Baker. So I took a picture of Baker with the same focal setting I had used earlier in the day when taking a picture of Mount Rainier. When I got home I checked the distances and both picture locations were about 31 miles from the subject mountain. 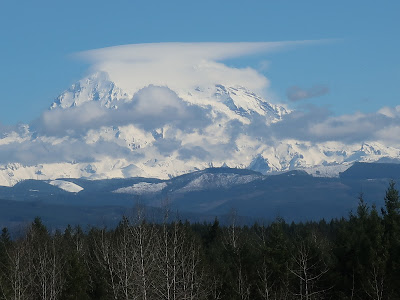 The view of Rainier from Pierce County southeast of Tacoma is a bit of jolt. 4,000 more feet of elevation and the corresponding mass is an awesome site to take in.
Posted by Dan McShane at 9:57 PM